Proper Focus and Mindset Can Help Men Stay Fit and Healthy Over the Decades.  For the average man, the body is in its best physical shape in the early to mid-20s.

But time can take a toll by age 30, when muscle strength starts to decrease by as much as 3 percent to 8 percent every 10 years. By age 40, reaction time starts to slow. At age 50, bones become brittle.

The good news is that proper focus and mindset can help men of any age maintain and even further develop a stronger body and mind. That’s the consensus of three staff members at Winter Haven’s Bond Clinic we spoke with for this special edition on men’s health. 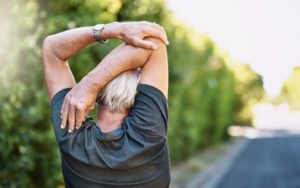 Dr. Carrie Goddin, Bond Clinic’s director of physical therapy and rehabilitation department, says one of the most important aspects of physical health as men age is maintaining flexibility. Flexibility begins to decrease in men after age 40, so she says developing proper warmup and stretching techniques early and maintaining those are key ways to keep up regular fitness routines.

“When you’re a young athlete, everyone tells you to stretch and you say ‘okay,’ and you do it for about 30 seconds and that’s it. But as you get older that gets much more important,” says Goddin, who has a doctorate degree in physical therapy from the University of Central Florida. “You need to ease into things and include good posture and core stability so you don’t overextend and injure yourself.”

Nicholas Olgee, a certified athletic trainer at Bond Clinic and trainer for the Florida Tropics professional soccer team, explains that as men age, they lose 1.5 percent of maximum physicality per year by age 35. He says a man should be able to maintain and counterbalance all aspects of physical training and exercise and not “overdevelop” one area.

“Ideally, you can listen to your body,” Olgee says.

“You can’t expect increases forever and ever, but you should be able to maintain posture reinforced movements. Things get harder to do, and you want to make things easier on yourself.” 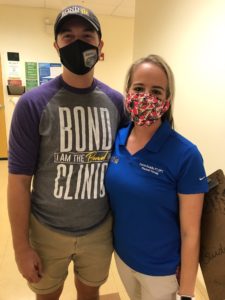 As for flexibility, they reiterate that flexibility helps prevent everyday injuries. According to Texas Health Resources, one of the largest nonprofit health systems in the United States, flexibility helps men avoid muscle and disk strains from turning over or getting out of bed; shoulder strains from lifting; backaches from going from seated to standing; and pain from bending down to pick something up.

Lifestyle changes are also important. Gene Estep, athletic trainer coordinator at Bond Clinic who received a bachelor’s degree in athletic training from the University of South Florida College of Sports Medicine, encourages men to evaluate negative physical influences as a way to stay on track physically. 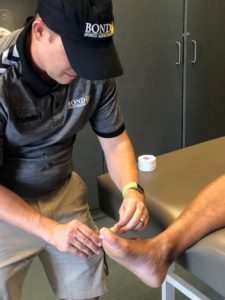 “Reduce as many negative vices in your life as you can,” he says. “For example, (alcohol) drinking affects hydration and you can easily cramp when trying to get fit and it also slows down the healing process for injuries. Try to reduce the negative things. You don’t have to quit them 100 percent, but moderation is the key.”

All three experts say proper nutrition is key to avoiding health issues later in life, as well as being able to sustain regular workout schedules. For example, in their 20s, a lot of men’s diets include takeout, processed foods and fatty protein sources such as hamburgers and chicken wings.

When men are young and their metabolism is high, the physical impact of bad diets is less. However, as men age, they need to focus more on eating food loaded with key nutrients, including fruits, vegetables, whole grains and beans.

“And also maintaining hydration is so key, especially if you’re active. You need to replace electrolytes. Just staying hydrated is probably one of the most important things to do,” Goddin says.

Additionally, once men enter their 50s and beyond, the psychological component plays a role in motivation in developing structured, regular fitness routines. Goddin says all men need to change their mindsets on exercise as they age.

“You can’t expect to do what you did at 25, but that doesn’t mean you’re limited and have to sit on the couch all day,” Goddin says, noting that she knows 60- and 70-year-old men who are still powerlifting weights.

“It’s important how you approach exercise as you age. It doesn’t mean you can’t be active and enjoy the things you enjoy; you might need a little more guidance now, that’s all.”

Olgee adds that doing a variety of fitness training helps with motivation by avoiding redundancy.

Of course, a proper frame of mind and focus is also key to maintaining and improving physicality as men age. Estep says staying on top of regularly scheduled health screenings for men becomes more important after age 50 and getting regular exams is crucial.

“I just wouldn’t be embarrassed over anything, like low testosterone or prostate issues,” he says. “A majority of men end up going through those things; they aren’t a particular problem. But with men, it’s kind of an embarrassment thing and you just need to get over that hurdle and get it done.”

Goddin emphasizes the importance of staying positive and not getting discouraged if you’re slowing down.

“A lot of times you try something and you hurt yourself, and you’re not able to perform the way you expect you can, and a lot times people stop whatever training they’re doing. It’s okay if you used to run 10 miles all the time and now you can just do two,” she says.

“Just ease into it. Don’t be embarrassed, just work on your goals and it will get better and better. Stay active, that’s the best advice I can give. Don’t give up.”