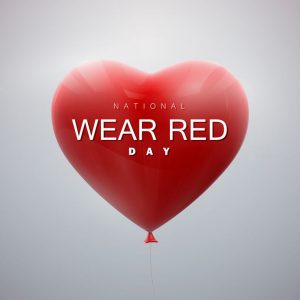 Ask any stylist, job coach or dating expert and they’ll tell you that red stands out. Eyes are immediately drawn to it. Some even say that the color red is a confidence booster and makes you feel powerful. Maybe that’s why we chose the color red to signify our fight against the No. 1 killer in women. Maybe it’s just a coincidence that it’s also the color of our hearts.

In 2003, the American Heart Association and the National Heart, Lung and Blood Institute took action against a disease that was claiming the lives of nearly 500,000 American women each year – a disease that women weren’t paying attention to. A disease they truly believed, and many still believe to this day, affects more men than women.

Stemming from that action, National Wear Red Day was born. It’s held on the first Friday in February every year to raise awareness about heart disease being the No. 1 killer of women.

This coming National Wear Red Day, Feb. 3, 2017, will mark 15 years since the initial National Wear Red Day, which was first observed to bring national attention to the fact that heart disease is the #1 killer of women, and to raise awareness of women’s heart health.  And looking back on all we’ve accomplished, we’ve really made tremendous strides. They include:

But despite our progress, more work is crucial. 1 in 3 women die of heart disease and stroke each year. But what’s more powerful? Millions of mothers, sisters, daughters and friends making a change. Resolve to make a change this year. Wear red on February 3rd, and make a difference in your life every day after.