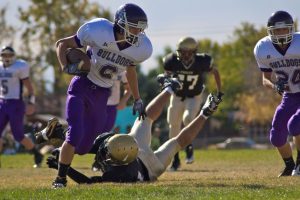 Football is one of the most popular sports played by young athletes, and it leads all other sports in the number of injuries sustained. In 2012, more than 920,000 athletes under the age of 18 were treated in emergency rooms, doctors’ offices, and clinics for football-related injuries, according to the U.S. Consumer Product Safety Commission.

WHAT TYPES OF INJURIES ARE MOST COMMON IN FOOTBALL?

Injuries occur during football games and practice due to the combination of high speeds and full contact. While overuse injuries can occur, traumatic injuries such as concussions are most common. The force applied to either bringing an opponent to the ground or resisting being brought to the ground makes football players prone to injury anywhere on their bodies, regardless of protective equipment.

Knee injuries in football are the most common, especially those to the anterior or posterior cruciate ligament (ACL/PCL) and to the menisci (cartilage of the knee). These knee injuries can adversely affect a player’s longterm involvement in the sport. Football players also have a higher chance of ankle sprains due to the surfaces played on and cutting motions.

Shoulder injuries are also quite common and the labrum (cartilage bumper surrounding the socket part of the shoulder) is particularly susceptible to injury, especially in offensive and defensive linemen. In addition, injuries to the acromioclavicular joint (ACJ) or shoulder are seen in football players.

Football players are very susceptible to concussions. A concussion is a change in mental state due to a traumatic impact. Not all those who suffer a concussion will lose consciousness. Some signs that a concussion has been sustained are headache, dizziness, nausea, loss of balance, drowsiness, numbness/tingling, difficulty concentrating, and blurry vision. The athlete should return to play only when clearance is granted by a health care professional.

Low-back pain, or back pain in general, is a fairly common complaint in football players due to overuse. Overuse can also lead to overtraining syndrome, when a player trains beyond the ability for the body to recover. Patellar tendinitis (knee pain) is a common problem that football players develop and can usually be treated by a quadriceps strengthening program.

Heat injuries are a major concern for youth football players, especially at the start of training camp. This usually occurs in August when some of the highest temperatures and humidity of the year occur. Intense physical activity can result in excessive sweating that depletes the body of salt and water.

The earliest symptoms are painful cramping of major muscle groups. However, if not treated with body cooling and fluid replacement, this can progress to heat exhaustion and heat stroke — which can even result in death. It is important for football players to be aware of the need for fluid replacement and to inform medical staff of symptoms of heat injury.

If your Student Athlete has been injured or needs treatment for a chronic condition, Bond Clinic has a fully staffed Orthopedic Surgery and Sports Medicine department. Drs. Lerner and Morin provide excellent care and have been with the Clinic for many years. Call them at Phone (863) 293-1191 x3530.