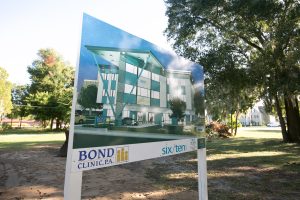 Despite being a fixture in Winter Haven for nearly seven decades, Bond Clinic’s presence in the city will soon be bigger than ever.

By Mike Ferguson
WINTER HAVEN – Despite being a fixture in Winter Haven for nearly seven decades, Bond Clinic’s presence in the city will soon be bigger than ever.

“In the past two years, Bond Clinic has seen more patients than ever before,” Dr. Panagiotis Iakovidis, the clinic’s president and CEO, said at a groundbreaking ceremony Wednesday. “This year, we’re on pace to break another record.”

In about a year, some doctors and patients will be moving from the current into a new, three-story, 36,000-square-foot facility on North First Street, the largest construction project to happen downtown in more than 40 years.

“This is an exciting project for us,” said Bud Strang, CEO of Six/Ten, who has been working with contractor Everett Whitehead and Son and the clinic.

“To get to this point, it’s taken a lot of people and a lot of work.”

The bottom floor will be for urgent care and pediatrics, Iakovidis said. One of the remaining two floors will be for current physicians and the other is for new physicians. Doctors will still work at the current main campus at 500 Central Ave., but the new building will allow Bond Clinic to expand its team and urgent care services.

Founded by Dr. Benjamin Bond, the clinic has been in Winter Haven since 1948 and was one of the first businesses to open downtown.

“It’s thrilling to see how this clinic has expanded and stayed committed to Winter Haven,” said Mayor Brad Dantzler, who remembers going to Bond Clinic for shots when he was 7 years old. “It’s going to employ 85 new jobs and higher paying jobs at that. It’s unbelievable.”

Other entities involved with the project include local Envisors, which will handle engineering; WMB Architecture and Bank of Central Florida, which will handle financing. Once completed, Bond Clinic is expected to see about 300 patients per day. Since opening in 1948, the clinic has expanded from four doctors to 68 medical providers, according to a release.
“From our perspective, it expands the medical resources for our residents,” said T. Michael Stavres, interim city manager of Winter Haven. “We’re always excited when a Winter Haven business expands to meet a growing need.” 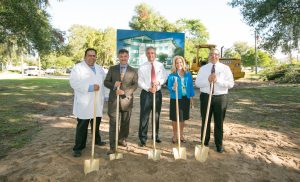