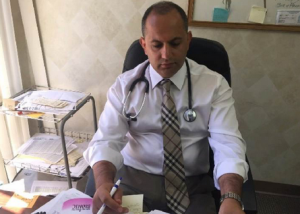 By Robin Williams Adams The Ledger

Although they know survival rates are high when cancer gets treated while it’s still confined to the prostate, they worry about how treatment will affect their sex lives and other bodily functions.

After surgery or radiation, there’s concern about whether their prostate cancer will return, as it does in 20 percent to 30 percent of patients.

Oncologists, researchers, prostate cancer survivors and others urge men not to become discouraged, even if their cancer does reappear.

There are follow-up options, including hormone therapy, new types of drugs that come into play when prostate cancers resist hormone therapy and immunotherapy, which harnesses the body’s own immune system.

“When you fight an enemy, you have to use all angles,” said Dr. O. Abu Hlalah, a medical oncologist at Bond Clinic in Winter Haven.

Yes, there will be about 27,540 deaths from prostate cancer in the United States this year, but a far greater number, more than 2.9 million men, are living with it.

Among them is Victor Ingargiola, a 10-year survivor who had 42 treatments with high beam radiation and two injections of Lupron Depot, a therapy that told his body to stop producing a hormone that stimulated release of testosterone.

Ingargiola, 77, is active with Lakeland Man to Man Prostate Educational Group, which has monthly meetings open to family members as well as patients.

Another is Mike Armstrong, 74, who opted for a lesser-known variant of radiation treatment, proton-beam radiation, that uses super-charged protons instead of X-rays. They enter the body with a low dose of radiation, go to the tumor site and deposit their main force into the tumor. Only a few centers nationwide offer it, although their number is increasing.

“There is hope and I’ve said it many times,” said Armstrong, who is five years’ post treatment. “Prostate cancer is the one to get if you have to get cancer.”

With the more standard external-beam radiation, variants such as intensity modulated radiation beam therapy have been designed to let radiation oncologists better adjust the radiation beam to get more of it to the tumor and less to surrounding areas.

Brachytherapy, when radioactive pellets are put inside the prostate, and cryosurgery, which freezes the prostate cancer, are other options.

Prostate cancer patients have choices from the start of treatment.

Research continues into the most effective treatments for cancer found at later stages. Although survival rates are much lower for metastatic cancers that have spread to distant parts of the body, late diagnosis doesn’t necessarily mean a death certificate, said Hlalah, pronounced Hay-la-la.

“In the last eight years, we’ve added probably at least five new treatment options,” Stewart said. “ It’s not the end of the world even if it returns

Men need to know we’ve continued to work on developing new treatment options that reduce their side effects and improve their benefits (quality of life and-or longer life).”

Men diagnosed with prostate cancer will spend the rest of their lives watching their PSA levels — prostate specific antigen, a marker by which the cancer is monitored. They watch at the start to determine whether a tumor needs treatment or should just be monitored for awhile. After treatment, watching continues to see whether the PSA level begins to increase.

Hormone therapy, such as Ingargiola had in addition to radiation, isn’t a cure. It’s a way of controlling the cancer by taking away the testosterone it relies on to help it grow. Hormone therapy can fool the testicles into thinking the body has plenty of testosterone and no more needs to be made, Hlalah said.

Most men’s prostate cancers respond to hormone therapy, also called androgen-deprivation therapy, he said. By reducing levels of male hormones (called androgens) in the body, it lets patients live for many years.

Eventually, though, many tumors become resistant to hormone treatment. New drugs are needed. The Food and Drug Administration has approved several in the past few years to target those resistant tumors.

Among them are Zytiga, which has the generic name of abiraterone acetate, and Xtandi, or enzalutamide. They interfere with pathways the cancer-feeding male hormones use, Hllah said.

Xtandi, for example, can block receptors on cancer cells to keep those cells from feeding off male hormones that remain in the body despite therapy to control them. An international randomized trial whose results were released last year found Xtandi increased survival in men whose metastatic cancer had progressed while they were on adrogen deprivation therapy.

Zytiga and Xtandi now are in hot competition, analysts report, as well as the subject of trials to see which is better. A trial at Lakeland Regional Health Cancer Center is comparing treatment with enzalutamide (Xtandi) alone to treatment using both enzalutamide and abiraterone (Zytiga).

That trial is for men with hormone resistant prostate cancer. Patients enrolled in it have rising PSA levels, cancer that’s spread to the bone or is affecting soft tissues.

At Watson Clinic’s Center for Cancer Care and Research, a randomized, double-blind study is comparing Zytiga and prednisone with a drug called JNJ-56021927 for patients whose hormone-resistant cancer has spread.

For men with newly diagnosed cancer that’s spread but still is sensitive to hormone treatment, another Lakeland Regional trial is comparing Casodex, an androgen-deprivation therapy now used with Lupron, to a newer drug that works like Casodex but with fewer side effects, Stewart said.

A different trial that just opened at Lakeland Regional is for prostate cancer patients who have been previously treated with radiation or surgery, who now have rising PSA levels but no evidence of cancer anywhere.

Standard treatment would be to keep monitoring them, Stewart said, but this gives men another opportunity. They would get Xtandi or an inactive placebo, with 2 out of 3 chances to get the active drug.

Another area of hope is immunotherapy, for which cancer specialists see great potential in treating a variety of cancers. The therapeutic vaccine Provenge, approved for prostate cancer that’s spread and resists hormone therapy, is a leader in that line of attack.

“It’s good for patients with metastasis but their health is generally good,” Hlalah said.