On August 12, 2017, Richard Moeller, President of the Florida State Soccer Association presented Bond Clinic, P.A. with the 2017 FSSA Presidents award.  The award presentation was part of their 50th Anniversary Gala and was received by Panagiotis Iakovidis, Bond Clinic’s CEO/President of the Board.  It was awarded for the ongoing support and involvement that Bond Clinic and Dr. Iakovidis have played in their organization.  In 2017, Bond Clinic’s Physical Therapy Division provided the on-site medical services for the thousands of players who participated in their statewide tournaments from all over the nation.

Dr. Iakovidis was honored to accept the award and knows this is a partnership that will continue for many years to come. 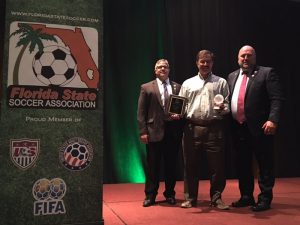