Dr. Charles Inman Talks about a Lifelong Pursuit in Medicine 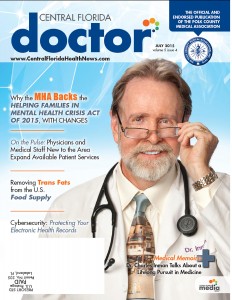 INFLUENCED by a family friend as a young man to become a physician, Charles C. Inman has loved being a doctor with a passion. He talks about his career and life experiences with great affection; even after all these years.

And while the man who was a full-fledged emergency room physician at age 26 does take issue with some of the dramatic changes that have permeated medicine over the years, he has never regretted following his dream. And it was a fast lane to the white coat, too.

Loma Linda University Medical School was one of only three medical schools in the nation that offered a special, three-year program. During the time of the Vietnam War, the government was asking schools to turn out more doctors. “The nation needed an infusion of physicians,” he recalls.  “It meant you finished in three calendar years, but there were no summer vacation breaks. That was rather grueling,” he says.

He then relocated to Orlando for his residency. “I wasn’t sure I wanted to do family practice, but I did enjoy emergency medicine a lot, and they had a very good emergency department at Florida Hospital.

“They hired me, and for eight years I was an emergency room doctor,” he explains. “I enjoyed the physicians— they were a very good group. And since I was unsure as to where I would land as far as a specialty in medicine, I decided to do that. I enjoyed it very much.”

And as much as he enjoyed the daily challenges of the ER, the course of his life changed. “I realized, maybe when I was in my mid-50s, that I wouldn’t like the pace so much. I had a family then, and responsibilities,” he says.

He decided to finish up the family practice residency he had started before he was hired as an ER doctor. “I did that and, in January of 1984, I joined Dr. Garrett Snipes in Winter Haven. He was one of my mentors and instructors up at my residency program. He was also in practice in Orlando, and I would see him in and out of the emergency room.

“It wasn’t too long before Bond Clinic approached us,” he says. He has been with Bond Clinic now for 30 years. When he came on board, he was the 25th physician. Today, there are 45 physicians and 21 nurse practitioners. Two more doctors come on board in August.

He has loved his profession. “I like to listen to stories and listen to my patients describe their lives,” he observes. “That’s why family practice is a good fit for me.”

Following in his footsteps, two of his children— he has four sons and two daughters—became doctors. Both sons, they were well prepared for what was ahead. “They certainly knew what they were getting into,” Inman says.

“Practicing medicine is very stressful,” he points out. But despite the natural stress that comes with the job, he was not finished pursuing his dream. “I embarked on obtaining a Master’s of Medical Management degree at Tulane,” he says. “After I finished at Tulane, I became the medical director at Bond Clinic, and I was in that position looking after patient complaints and quality assurance.”

Not long after, his life would suddenly change. “At age 62, I was suddenly stricken with Gullian-Barre Syndrome. That left me very weak in the lower extremities. I was out of work for 10 and a half months.”

Despite his illness, though, he came back in 2012. He sees patients in the mornings. “My practice is more relaxed now, and I enjoy my other hobbies,” he says. “I like to read, workout at the gym, watch movies, and work in my yard. I enjoy my family the most. I have 11 grandchildren.”

At age 66, he says he has no intention of leaving Winter Haven. “I am glad to live in Winter Haven. I love it here. I don’t understand why every doctor doesn’t love this lifestyle. I like living in a medium-size community. I love the Southern way of life.”.” ✱