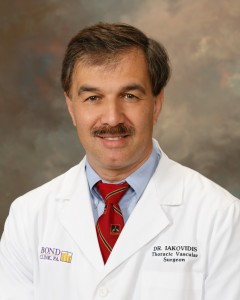 time and commitment into Polk County.

WINTER HAVEN — From the time he was 5 years old until he was 17, he spent many hours in his backyard or on the soccer pitch, even playing soccer on the fields of one of Greece’s most famous soccer clubs — PAOK FC, based in the port city of Thessaloniki.

At 19 years old, Panagiotis “Panos” Iakovidis moved from his native Thessaloniki to Houston to attend the University of Houston and along the way imported two of his passions: soccer and service.

Today, Dr. Iakovidis is a board-certified cardiothoracic surgeon at Bond Clinic in Winter Haven, where he has been chairman of the board, CEO and president since 2009.

BIGGEST ACCOMPLISHMENT: “Being at Bond Clinic as president and CEO and being able to develop programs that provide quality health care, increased access to care, at lower costs.”

MOTTO/FAVORITE QUOTATION: “Strive not to be a success but rather to be of value.” Albert Einstein.

He is also majority owner of the Florida Tropics, part of the 17-team Major Arena Soccer League, a professional, indoor league based in Baltimore, which plays its home matches in The Lakeland Center. Chris Ecomomidis and Andrew Haines are the team’s other co-owners.

Sitting in the team office conference room on Bartow Road in Lakeland, Iakovidis, 57, said although he works to help the Tropics do well on the field, he also wants the team to connect and become part of the Polk County community.

In addition to being an owner of a professional soccer team, he has served as a coach and manager of soccer clubs that have competed at the national level; is the manager of the Kickers FC of the Florida Suncoast Soccer League; and is a former member of the Lakeland Adult Soccer Organization.

And in his more than 20 years at Bond Clinic, he has served as chairman of the Bond Clinic marketing and operations committee and is a member of the finance committee and CEO of the board of directors.

In addition, Iakovidis owns High Performance Car Care Centers in Winter Haven, Dundee and Auburndale. He also is involved with organizing Tropics children’s day camps, soccer clinics for schools and youth programs, getting team members for guest appearances to local schools, setting up tutoring programs and helping with Junior Achievement Lakeland, the Society for the Prevention of Cruelty to Animals (SPCA) Florida Adoption Center and Reading for Life, Lakeland.

Since settling in Winter Haven in 1996, after spending six years in San Antonio, Texas, and two in West Virginia, Iakovidis has become a fixture in Polk County with his passion for sports and his compassion for community service.

“But we still have a lot of work to do and still need communities, governments and businesses to help with support,” he said.

One of Iakovidis’ most notable undertakings happened in 2013 when he was part of an unsuccessful attempt to merge Bond Clinic with Gessler Clinic, two major Winter Haven medical groups.

The merger would have reflected changing health-care dynamics that have hospitals and clinics nationwide seeking alliances, an increasingly common undertaking, industry analysts said. Had they combined, there would have been about 100 physicians, physician assistants and nurse practitioners under one roof.

That merger fell through in 2014, Iakovidis said, citing each clinic’s desire to work as separate entities.

But Iakovidis, who got a medical degree from the University of Texas Medical School, Houston, is working to keep his connections with the Tropics, Bond Clinic and those with whom he shares his home county of Polk.

Andrew Ross, team general manager and vice president of business operations, said he knows how involved Iakovidis is. He said he’s personally seen the doctor’s desire to push for the best on the field and outside his offices.

“He is making appearances at events for both Bond Clinic and the Tropics. We have a plan in place to grow the sport of soccer here in this market and Dr. Iakovidis shared our same vision right from the start,” Ross said.

“He provides the local connection and affiliation we need to strengthen our organization and show we are here to stay for many years to come,” he said.

Pamela Craven, executive director of the Learning Resource Center of Polk County, said she heard Iakovidis give a presentation at a Central Florida Sports Commission banquet and was impressed with his altruistic nature.

Through Iakovidis and Ross, the Tropics provided an autographed jersey for auction at the center’s Feb. 18 fundraising luncheon and offered continued sponsorship support.

“As a non-profit sitting there, I was really impressed with someone who is at that level of sports ownership … who is totally about things that are good for our community and our families and not just the bottom-line economic benefits,” she said.

Lily Romine, regional director for Junior Achievement Polk and Highlands counties, said in December that Iakovidis and the Tropics brought players for children to meet at Mulberry’s Kingsford Elementary School, which has a large Hispanic student body, many of whom are big soccer fans.

As for his future with the Florida Tropics — which finished its inaugural season with an 8-12 record — Bond Clinic, and his work and life in Polk County, Iakovidis said he’s here for the long term.

“This is a great place to live; you can raise a family, develop a business, have a vacation, get a good education and job; it’s all here,” he said. “There are great opportunities; you just have to make them happen.”