June 21, 2022 (Winter Haven, FL) – Bond Clinic, P.A., CEO Dr. Panagiotis Iakovidis was honored with the Bernie Little Sports Executive of the Year Award during the 2022 Polk County All-Sports Awards on Tuesday, June 14, 2022. Dr. Iakovidis was recognized for his ongoing investment in the community through sports and his ownership of the Florida Tropics Soccer Club in Polk County, FL.

Panagiotis Iakovidis, MD, is a board-certified cardiothoracic surgeon practicing both thoracic and vascular surgery in Winter Haven, FL. He joined Bond Clinic in 1996 and assumed the role of Chairman of the Board in 2009 and has served as the CEO and President since then. Although he has had a long history of ownership of various soccer teams, he first became involved with the Florida Tropics Soccer Club in 2016.  He quickly invested in ownership and has been instrumental in the success the club has seen as the longest-running MASL indoor soccer team in Polk County.

Through his support, the Florida Tropics Major Arena Soccer League (MASL) had one of the best seasons on record while playing games at the RP Funding Center in Lakeland, FL. The team would finish in second place while competing for the championship title in 2022. The Tropics outdoor team is currently plays in United Premier Soccer League (UPSL) at the Lake Myrtle Sports Complex in Auburndale, FL.

“This was an honor to receive this award and an honor for Bond Clinic to be a part of this community event,” said Dr. Panagiotis Iakovidis. “By being involved with sports, Bond Clinic is empowering healthcare through partnerships to create healthcare without walls.” 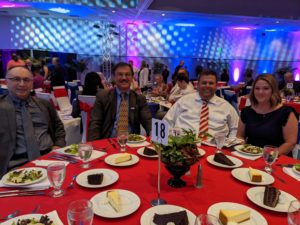 If you would like to know more about Dr. Iakovidis or the sports medicine program at Bond Clinic visit www.bondclinic.com for more information.